The extreme right-wing, racist incident that has happened in Charlottesville, Virginia (USA), during this past week, has been a hot topic, including among the colleagues here at BRIL.Solutions. (If you want further details, please see the sidebar.)

I set up BRIL.Solutions as a way of making breakthroughs in multinational workplaces through, among other techniques, the fostering of dialogue to create an appreciation of other people’s differences where fear and misunderstanding were causing disunity.

The results of the training and coaching sessions I provide consistently show that once a team is able to use the strengths that its members may have because they are from different cultures, then even the biggest challenges can be surmounted. Moreover, with these perspectives, projects can be taken in innovative directions. Encouraging free and open communication is the key here.

With the Charlottesville incident, I’ve also noted that it falls into a specific and consistent pattern; I’ve managed to draw the same conclusion as I do whenever extremists are involved, be it the Timothy McVeigh bombing of the Alfred P. Murrah Federal Building in Oklahoma City (1995), the World Trade Center bombing (9/11/2001), the Charlie Hebdo/November 15 attacks in Paris (2015), and others. To wit:

You can’t dialogue with extremists

The goal of this post is not to ‘reach out’ to those with extremist views, because you can’t dialogue with extremists, but to publicize  our own stance.

At BRIL.Solutions, we do not endorse or criticize  political views. Rather, we welcome and encourage a wide variety of thoughts and opinions from our clients and even among ourselves, and while the Charlottesville incident clearly has political overtones, we are not looking at it in this light. We write about Charlottesville, because we firmly denounce any idea that any human being or group of human beings has less of a right to exist in freedom and safety than any other human being(s). We also believe that hate has no place in public discourse. We believe something must be done in light of the incident, but what?

Long experience in facilitating dialogue shows us that understanding between those of difference must have at its basis goodwill and curiosity. All parties must have a shared desire to communicate, and to consider the possibility of taking constructive steps forward – and this is where the problem lies – or does it?

Extremists, such as those demonstrating for their ‘White rights’ in Charlottesville, are not interested in speaking with and finding value in those different from themselves. They are not looking for constructive solutions. They are only interested in shutting out ‘the other’ in a destructive and even life-threatening manner, all the while, claiming a false narrative about ‘natural rights’. At BRIL.Solutions, we talk about bridging divides among people of difference, but if these people see a bridge, their reaction is to burn it down.

Having worked in the past with various groups in Europe whose goal was to prevent radicalization among minority youth, I have, on a more personal level, witnessed situations where extremism is the problem.

The solution: strengthen the middle

It is commonly, and somewhat idealistically, believed that by strengthening the middle, it will be possible to pull those who might be teetering on the fringe towards them, and avoid their radicalization. In retrospect, I can say that this technique may prevent a handful of extremist-leaning individuals from performing extreme behaviours. However, truly radical activists refuse to willingly involve themselves in such learning activities, so they remain unaffected.

Strengthening the middle is still the solution.

Here’s why: It encourages a previously neutral, disconnected and possibly apathetic majority to empathize  with one another, form a connection and, if not become friends, then at least be respectful of one another, and endorse such treatment.

This is not about ‘not taking sides’. There is power in numbers, and the purpose of strengthening the middle is to wake the majority up from a weakened stance, i.e neutrality.

There is no neutral ground 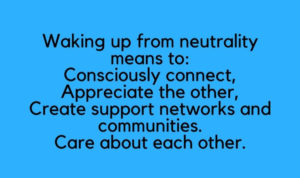 In short, neutrality means paving the way for radical extremists because it gives them confidence that no one will bother to challenge their views, let alone their activities.

Waking up from neutrality is about consciously connecting with, and appreciating others, including those with whom you have little in common on a personal level. It means the creation of active support networks for when things do go wrong. It creates communities and societies where people will actively tackle human rights issues because they now care about the welfare of their friends and neighbours, enough to do something about it.

Strengthening the middle is not a one-time event. It’s a constant process which we at BRIL.Solutions endorse through our public stance and in our own work. We may never engage in dialogue with the extremists of Charlottesville, and this doesn’t matter. The creation of solidarity as the new normal means that society is taking a stand. We are openly stating that we will not remain silent or turn a blind eye when someone’s freedom and safety are compromised.

Solidarity means that while the bigoted and prejudiced minority have equal rights and freedoms as any other human being, there is no room for them to put their extremism on display. Everyone is treated with respect, and society becomes more civilized , safe and secure.

Charlottesville has shown us that there is no middle ground. Neutrality works to nobody’s benefit because it allows for the carrying out of grave injustice. We must actively reach out and support our fellow human beings regardless of race, religion, language, gender, sexuality or any other difference. We must foster the expectation that we will look out for them, and that they will look out for us, in both the easy and the difficult times, and we must meet these expectations daily through our chosen behaviors and activities.

Charlottesville – Where There Is No Compromising

This site uses Akismet to reduce spam. Learn how your comment data is processed.

For more enthusiastic reactions from our clients, refer to our Testimonials page. You can find a list of our clients on our Portfolio page.

Your approach opened my eyes to cultural differences - even inside our own company!

Shanghai is an amazing place, full of contrasts, with incredible ambition. I have run into NO cultural communication issues that I can’t handle, thanks to your training!