There has been much ado around Billy Evans, the owner/manager of Field Farm fisheries, who decided to ban Polish “and other Eastern bloc” fisherman from using his farm-stocked recreational fishing ponds near Oxfordshire (UK). After hearing that “there’s Poles or somebody stealing fish,” he erected a sign at the entrance reading: “No vehicle access. No Polish or eastern bloc fishermen allowed. No children or dogs.” 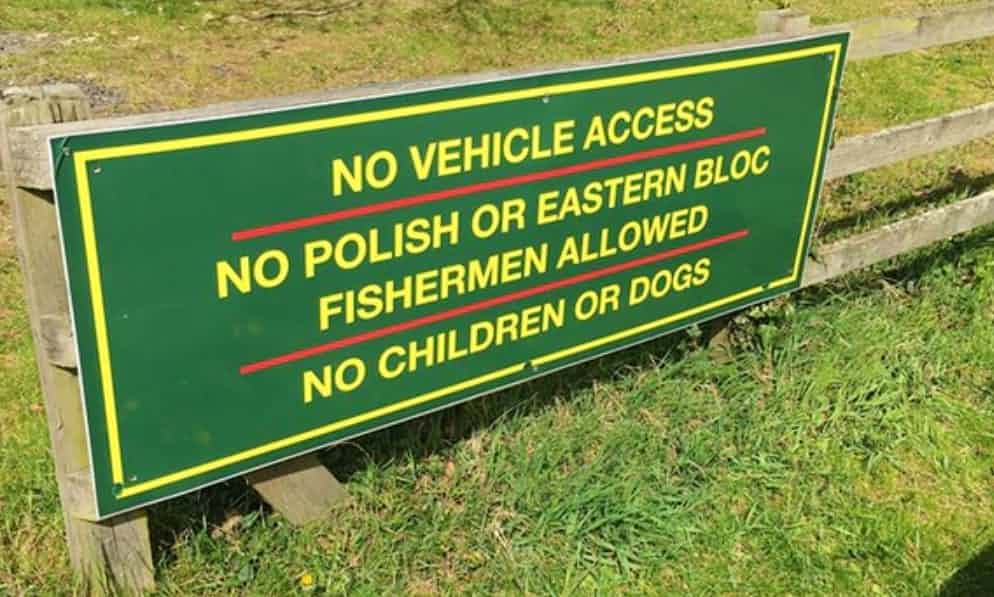 Mr. Evans stated, “I do not tolerate thieves, wherever they come from,” he said. “I will stand up for what I believe in. If they want to call me a racist for stopping thieves coming on to my property then that’s what they’ll do.”

Especially angered has been Radoslaw Papiewski, 35, from Doncaster, who said his fellow anglers had told him about the notice. He said, “This disturbing sign should have never been displayed as it clearly discriminates against people from Poland and other eastern European countries.”

Mr. Papiewski is not your random angry Pole. He is project manager for Building Bridges, a project aimed at integrating fishing communities from mainland Europe – much of which allows anglers to keep their catch – with anglers in the UK, where fish must be returned to the water. He helps educate non-British anglers about the difference between the laws governing angling in mainland Europe and those in the UK, in an effort to ensure they abide by British rules. The purpose of British laws requiring anglers to return their catch is to improve conservation and prevent the depletion of fish stocks.

The upshot of all this is that the Equality and Human Rights Commission (EHRC) has become involved and has threatened legal action unless the sign was removed. A huge public outcry has ensued, and Mr. Evans has been demonized as a racist. “My family has been threatened,” he stated. All around bad feelings, a divided community, and potential bankruptcy, due to legal fees and the closure of the business.

So let’s imagine what might have happened, had Mr. Evans attended a course in intercultural communication from BRIL.Solutions and had been culturally aware. Let’s look at it objectively:

Non-English fisherman, specifically those from Eastern bloc countries, are (allegedly) catching fish and keeping them rather than returning them carefully to the water, as is custom (and law) in the UK.

What’s so ‘intercultural’ about all of this?

You might say, this is all well and good, but isn’t this a simple information and communication problem? What does culture have to do with any of this? A fair question, so let’s explore it.

As a fisherman myself, I understand the position of the Polish fishermen. There is something fundamentally satisfying about keeping and eating your own catch. It fulfills a primal instinct in being able to provide for yourself, your family and your community. This may be especially true in Poland, where cultural values around traditional masculine roles are ranked medium-high and, combined with high power distance (see Hofstede cultural dimensions comparing Poland and the US), may lead a Polish fisherman to feel that leaving his catch behind is threatening his role in society. A man is the boss of his family, and is expected to provide for it, while his wife prepares the meals and looks after the children. To come home empty-handed after a day of fishing means failure. He’s not fulfilled his role as head of the family.

In the UK, especially in stocked ponds like Mr. Evans’, fishing is seen as more recreational, more a hobby. Something to do with the kids on the weekend. There are few, if any, societal implications with fishing. It’s fun; a lark. I can imagine that Poles see the British attitude as a colossal waste of time.

Secondly, you might think, “Reaching out to so many people, organizing meetings – who’s got time for that?” Indeed, the culturally aware path requires a heavy up-front investment. But look at what the alternative course of action results in: an alienated community and a failed business. Either course of action will result in costs of some sort. Why not invest the costs up front and have a positive, value-building outcome?

The story of Mr. Evans’ fishing hole is but one example of many where there’s lost value due to a lack of awareness of intercultural differences. It pains me to see potential value-building gone to waste. Not to mention the human side of this story, the feelings of exclusion and rejection. The opportunity to build, create, bring together and encourage mutual understanding was squandered, in favor of divisiveness, hard feelings and more misunderstanding. And why? Because of lack of information, lack of awareness, pride and stubbornness.

I can be a bit of an idealist, but wouldn’t it be wonderful (not to mention more value-building) if we could approach all of our challenges with openness and willingness to learn, especially about others, before we go erecting signs, walls and barriers?

This site uses Akismet to reduce spam. Learn how your comment data is processed.

For more enthusiastic reactions from our clients, refer to our Testimonials page. You can find a list of our clients on our Portfolio page.

Your approach opened my eyes to cultural differences - even inside our own company!

Shanghai is an amazing place, full of contrasts, with incredible ambition. I have run into NO cultural communication issues that I can’t handle, thanks to your training!